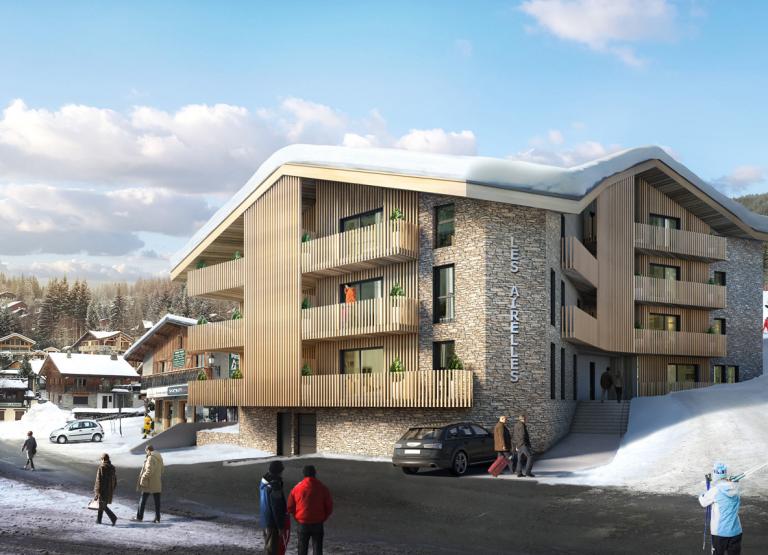 Les Carroz is a charming and authentic French alpine village that is situated at the base of the vast Grand Massif ski region. The Grand Massif is one of France’s largest and most snow sure ski regions and includes the popular resorts of Flaine, Les Carroz, Samoens and Morillon across its 265kms of piste. The village has a laid-back atmosphere, a new spa and wellness centre, and plenty of great restaurants serving a good mix of modern and alpine classics! Les Carroz is a true year-round destination and offers a good selection of summer activities including some spectacular hiking and biking and also the scenic Flaine-Les Carroz 18 hole golf course. Les Carroz is an ideal resort in which to buy an alpine property if you are looking for a more charming and authentic holiday home, close to Geneva, and in a beautiful part of the French Alps.

Being just over an hour’s drive from Geneva, Les Carroz is one of the most popular resorts in the Grand Massif ski region in which to buy a French ski property.

More charming than Flaine, Les Carroz has a good selection of ski chalets and apartments for sale that sit along a wide, wooded valley that offers some spectacular mountain views.

Some of the older farm buildings have now been re-developed to create large modern chalet-style homes that often sell for EUR 1m+.

More affordable, are the few new build apartment developments that often come with on-site rental management and private spa and wellness facilities. It is possible to buy an apartment in one of the buildings from about EUR 350,000.

There are a few genuine ski-in ski-out properties for sale clustered around the piste beside the Kedeuze gondola. These tend to fetch a 20-30% price premium over a similar apartment or chalet located in the village centre.

The village is small enough that most property is within a reasonable walking distance of the ski lifts. However, if you are looking to rent out your property, you are well advised to buy within a maximum 5-minute walk of the main gondola or the Plan Moulin drag lift.

Les Carroz dates back to 1936 and is one of the best locations within the Grand Massif ski region in which to be based and to explore the 265kms of piste.

At 1,200m Les Carroz is high enough that it’s usually possible to ski right down to the village at the end of the day. The surrounding pistes around Flaine rise to 2,561m making this one of the most snow-sure ski regions in this part of the French Alps.

Les Carroz is has some great tree-lined runs that wind their way down through the forests and back to the village – ideal if you are skiing with young children. The nearby resorts of Morillon and Samoens also make for fun-day trips.

Early or late in the season and you will want to head up to Flaine where you will find plenty of good-high altitude pistes with great long descents down into Flaine. Serious skiers can head up to the Tete des Lindards where there is often plenty of accessible off piste skiing or ski touring routes.

Being a traditional French village rather than a purpose-built ski resort, Les Carroz never shuts down entirely and you will find a small and welcoming local population who live here year-round.

As such, summer in Les Carroz tends to be slightly busier than some of the higher altitude resorts in this part of France.

A typical day around Les Carroz in the summer may include a hike or bike ride in the mountains followed by a relaxing afternoon around the lake or at the water sports centre.

Many of the main lifts run during the peak summer holidays so you are able to head up into the mountains and enjoy a long lunch, some spectacular views, and then an easier hike or cycle down.

Golf fans will enjoy the 18-hole Les Carroz-Flaine golf course which, at a dizzying 1,900m, is one of the highest and most scenic in the whole French Alps. The course is open from July to September and attracts golfers from all over the region.

Other summer activities on offer include tennis, white water rafting and horse riding.